Why You Should Choose Study Abroad Dubai Program For Your Future 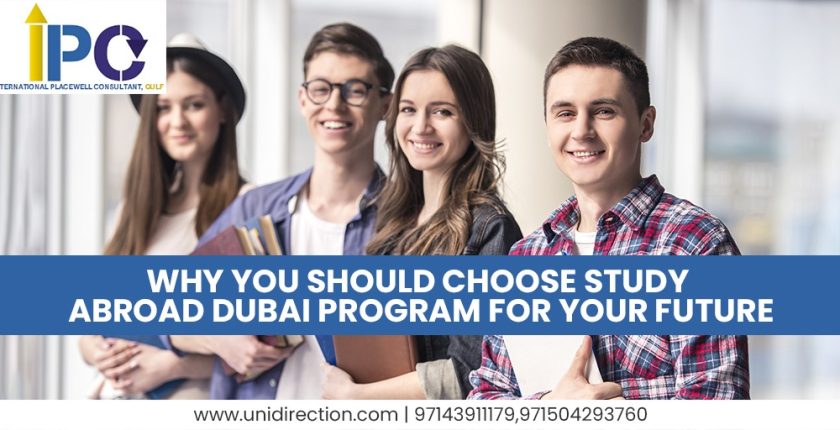 Are you thinking about study abroad Dubai? Who hasn’t heard of Dubai? Dubai is one of the Emirates in the United Arab Emirates and is renowned as the “Golden City” due to its rapid growth in trade, oil, and business. Many strange things exist in Dubai, from camels to sports cars, from culture to the prince’s charm, from vending machines to the uber-rich locals. It’s like a separate metropolis, one of the world’s most contemporary and progressive cities, with world-class facilities, infrastructure, and a prominent position in the global corporate sector. Here are some compelling reasons to consider studying in Dubai.

Dubai is the world’s fifth fastest expanding economy, out of more than 300 metropolitan economies. The nicest aspect is that you may have the opportunity to study abroad Dubai. The rise of trade and tourism, which is pushed in Dubai, is credited with such accelerated economic growth.

You’re probably well aware of Dubai’s economic might. You will not have difficulty finding work after completing the course in this economy. Once you enter the city, you will notice that it is home to prominent corporations such as the BBC, Sky News, AP, HP, and others.

Although we cannot conclude that the Gulf States are politically stable, Dubai’s political system is both stable and secure. Because of its political stability, many overseas students are persuaded to study in Dubai. Furthermore, Dubai’s relationships with other cities and countries are amicable and secure. As a result, there is no risk of future instability.

As a famous tourist destination, Dubai attracts a large number of celebrities, influencers, athletes, and other inspirational personalities from all over the world. It goes without saying that there will be no dull moments here. Furthermore, the city’s wealthy emirs frequently employ the top entertainers for themselves and similar gatherings.

We can’t dispute that having over 100 countries in one location results in people with a wide range of opinions, styles, philosophies, and accents. According to surveys, Emiratis account for only 20% of the entire population of the territory’s national culture, with the remaining 80% belonging to foreigners from all over the world. You might hear English, Arabic, Farsi, Urdu, Hindi, and even Tagalog spoken on the streets. When students depart Dubai, they take with them a collection of wonderful memories.

Hopefully, we can conclude that you’re aware of the potential for your career to soar in Dubai. We don’t want to limit your opportunities. We want you to reach levels far beyond the Burj Khalifa. Uni Direction has assisted numerous students in realizing their ambition of study abroad Dubai. So, why are you putting it off? Contact us right now!