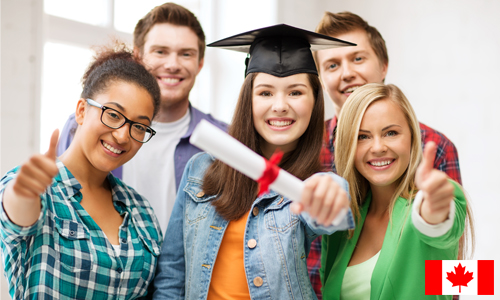 An education of quality and recognized internationally

Canada believes a lot and has invested a lot in education in order to have a very high-quality education system. Apprenticeships are of great importance to Canadians. Canada is one of the G8 countries and the world’s largest expenditure on education. The Canadian English-speaking university “McGill” is one of the oldest and most prestigious universities in Canada, located in downtown Montreal and has more than 30,000 students. The University of Toronto, located in Toronto, Ontario, is Canada’s largest university with more than 70,000 students and one of the best universities in Canada and North America. Toronto is Canada’s largest city in terms of both population and economic power.

Cost of studies in Canada

In comparison with the United States, the United Kingdom, New Zealand, or Australia, Canada is where the costs of Canada study overseas for foreign students is the lowest. Tuition fees at a private American university, for example, maybe more than double that of Canadian universities. One of the great benefits of studying in Canada is, therefore, to benefit from quality education and a North American way of life, without having to bear the sometimes very important costs of studying in the United States, for example. Moreover, for school exchanges, carried out in partnership with the university of its host country, there are generally no additional costs to bear. So it is very interesting when we have the opportunity.

Quality of life in Canada

Canada’s quality of life is recognized worldwide, and Canada is ranked in the top 10 of the world’s highest quality of life. According to the latest figures, Canadians own more than 70% of their homes. And have all the tools or infrastructure for a good quality of life. Canadians are welcoming, and often very pleasant, so international students will feel comfortable. In Montreal, for example, the second-largest city in Canada, the climate of life is very serene and contrasts with the stressful climate that can be found in Paris (France) or other European cities. Squirrels can be seen in parks in Montreal, for example, and even in the city center, near trees, in quiet neighborhoods.

Canada is a safe country

At the political level, Canada is a democratic country where freedom reigns in all its forms. The differences are respected, accepted, and as an example, Canada was one of the first countries to legalize the marriage law for same-sex couples through a Supreme Court decision. Cultural diversity is respected and even encouraged. Canadian cities are safe and often safer than American cities. This is still relative because big cities like New York are still very safe cities, but Canadian cities are considered very safe, and the crime rate is lower than in cities in the United States. Canadian roads are also relatively safe.

And yes, Canada is a bilingual country because it has two official languages: French and English. French is very protected in Quebec to prevent English from eventually transforming all of North America into an English-speaking area, hence some laws from the province of Quebec to protect the French language that may seem odd at first sight.

In spite of that, Montreal, the first French-speaking city in Canada, the second-largest French-speaking city in the world, bilingualism is very strong. English is an indisputable place, and you can speak invariably in French or English or why not both. In major universities in Canada, English reigns supreme. Canadian students or residents who contact the government are often offered the choice of which language to contact and communicate with.