IPC > Blog > Study in Canada > Canada Study Overseas Program: Consider it as a Destination for Your Future Abroad Studies

Canada Study Overseas Program: Consider it as a Destination for Your Future Abroad Studies 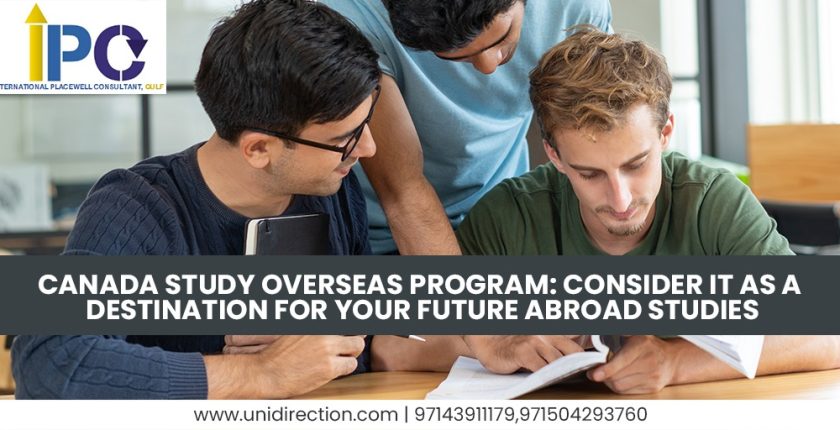 For the vast majority of students, a Canada study overseas program is their dream comes true; Canada is among the greatest places to study abroad due to its top-notch universities, well-developed infrastructure, and strict educational requirements. However, the idea of attending school in Canada scares a lot of individuals. The elements that go into choosing a wise choice will be discussed in this article.

In general, Canadians are kind, considerate, and deeply committed to their communities. Although their fundamental cultural characteristics are individualistic, they nevertheless lay a strong emphasis on the individual’s duty to the community. Particularly in provincial and rural Canada, Canadians have a reputation for being highly cordial and inviting people. The distinction between Canada’s English-speaking provinces and the USA, however, may be problematic for students who enroll in Canadian study abroad programs. It would be necessary to speak French well to live in Quebec.

The diversity of Canada’s climate, both from region to region and from season to season, is what makes it so unique. Every year, the north experiences temperatures below zero degrees. However, the majority of Canadians reside 300 kilometers or less to the south, where hot summers and pleasant weather are present for at least seven months of the year. Four distinct seasons exist in Canada: Spring (March-May) summer (June to August), autumn (September to October), and winter (November-February)

Globally, an American degree, diploma, or certificate is regarded as being equal to one earned in Canada. Canada has some of the finest living and educational standards in the world, and the cost of living and tuition for foreign students are typically lower than in other nations. With four Canadian colleges appearing in the QS Top 100 university rankings and ten more appearing in the top 200, Canadian universities are widely acknowledged to be of a high caliber.

The majority of students in Canada favor living in dormitories. They often offer a shared kitchen, bathroom, and laundry facilities and are situated close to universities. Optional cafeteria meal plans in which students pay and receive two or three meal tickets each day are available in some dorm rooms. The housing office or student’s union of the majority of Canadian institutions and colleges typically has a list of private lodgings (apartments, flats, or rooms). Before signing a lease, it is best to visit the potential home in person and ask any questions you may have.

Go With the Experts of Uni Direction

The best study experience of your life can be had in a country like Canada with the Canada study overseas program if you receive the best and most pertinent advice from Uni-direction, which assists students by giving specific information about studying in Canada. You may talk to one of our professionals right now.